Art, Birds, and other things: All Give Praise to the Creator

Loja, Ecuador: Birding the Nearby Roads

Early one morning we headed out towards Zamora to the east to bird the old road. There are several waterfalls along the new road and we had to stop near one of them while a crew cleaned a landslide off the road. We ended up getting all the way to Zamora without ever finding the old road. So we stopped in a bakery and bought some “balones de yucca” for a snack. They were kind of like corn fritters and very good! Then we asked directions and found the road, totally unmarked.

We crossed a fast flowing river and found a couple of White-Capped Dippers that were fun to watch. We were attracted to one spot that had a lot of Tropical Kingbirds and were really excited to spot some very colorful birds right away. The Inca Jay is awesome! But then we saw some Cock-of-the-Rock which were quite active in a nearby tree and we forgot about the Inca Jay while we were watching him. The ones we had seen in the Mindo area are red and the ones in the south are orange. How fun that we got to see them both! 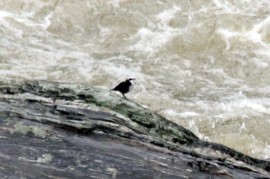 We had read that there was practically no traffic on the old road so were surprised to see a number of trucks going by. And we had thought that we would work our way back to Loja on this old road. However, part way along there were large piles of rocks for construction blocking the way. So we went back and approached the road from the other end. We stopped at various places along the way stalking bird sounds. Sometimes we were rewarded and sometimes not. At one stop a Crimson-Mantled Woodpecker showed up. It was really pretty!

We had to get back to Loja so we turned around. On the way back to Loja we crossed a really high place where we stopped to check out the possibilities there. We did get to see a Rufous-Naped Brush-Finch, Glossy Flowerpiercer, Green-Gorgetted Hummingbird, and Pale-Naped Brush-Finch. Three of the four birds were new to us.

Another day we went out another side of Loja to the road that goes beyond the wind-mill farm. We parked and walked the dirt road for a long ways. There were a lot of treats for the eyes along there. Only Dave saw and photographed this Plushcap. Unfortunately, Jen and I had gone on ahead and missed it. 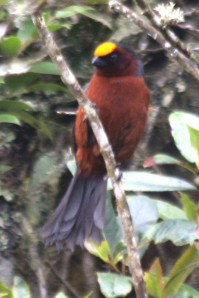 Deep into the gorge on one side of the road there was a place that attracted hummingbirds. It was a bit hard to see them, but we were able to identify the Green-Tailed Trailbearer among others.

On our return trip we stopped to photograph our old friend the American Kestrel.